When teaching Relationships and Sexuality Education in schools, it is important to recognise the diversity in the range and variation of people’s gender identity and sexual identity. Teachers need to ensure that lessons cater for all students including those who do not identify as heterosexual and cisgender.

It is common for people to confuse sex, gender, gender identity and sexual identity, but they are all very different things.

(See also: Sexual Diversity. This offers information on how to support students of all sexual identities including those who do not identify as heterosexual. See also: Intersex Variations.)

The difference between sex and gender

Gender is often based on how society thinks we should look, think and act according to our sex assigned at birth. Each culture has beliefs and ‘rules’ about how they think people should act when they are perceived as male/masculine or female/feminine. Gender stereotypes are the fixed and specific roles for males and females that are learned from a very young age by family, friends, teachers, leaders, religion, schools, workplaces, advertising, television, songs, movies, social media, etc.

This stereotyping behaviour can include the colours we dress children in, the toys children are given, the sports which are encouraged, subjects studied in schools, and what interests and hobbies are pursued. The rigid application of stereotyping can have detrimental effects, such as people having false assumptions about others, their behaviour and how they believe people ‘should’ behave.

Children can be exposed to bullying and teasing when they are seen to not conform to gender stereotypes and expectations. The period of adolescence is a powerful time for gender stereotyping. The peer group, in particular, has a powerful influence on persuading adolescents to behave in ways consistent with the roles and expectations of a particular gender. Restricting what people can and can’t do based on gender stereotypes only limits what they can achieve. It can affect a person’s social, work and legal privileges. We want to maximise our students’ potential and challenge stereotypes and discriminatory behaviour.

Many cultures recognise and celebrate multiple genders and have a broader idea of gender beyond the binary ‘male’ and ‘female’, and have done so for many centuries. This map  (external site) shows the societies around the world that have their own long-established traditions for multiple genders.

The way that people express their gender is unique to each person - what they wear, how they cut their hair, how they talk, walk and act. Quite often the way that the world sees someone’s gender is based on the stereotypes and expectations that society, media and culture have assigned to being ‘masculine’ and ‘feminine’. These stereotypes are limiting and potentially harmful and they are not an accurate reflection of human diversity and gender expression.

Almost all children begin expressing their gender identity at 2-3 years of age through their preference for particular clothing, toys and interests. If these expressions do not fit stereotypes and expectations, it may mean that a child is role playing as a normal part of developmental play, or it may mean that the child is simply not conforming to rigid gender stereotypes. It may mean that the child may be transgender or gender diverse. Most children’s gender identity matches their sex assigned at birth, but for a small number, it does not. This is part of the natural spectrum of human diversity.

To follow are some descriptions of some common terms that are used to help understand some aspects of gender identity. It is important to remember that these are simple descriptions and, just as with all aspects of people’s individuality and identity, the lived experiences of people who are gender diverse hold many more variations and self-descriptors.

Cisgender is a word used to describe people whose gender identity is the same as the sex they were assigned at birth.

Being transgender or gender diverse is when someone’s sense of being male or female is different from the sex they were assigned at birth.

By a very young age, most children know their gender identity and find it very difficult to think about themselves in any other way. For other children understanding their gender identity is more complex and they may not be able to express this until they are much older. Many young people who are gender diverse will feel comfortable with their gender identity and may not desire any form of intervention or transition. Others can feel extreme distress living in the gender assigned to them at birth and wish to take steps toward more accurately expressing their true gender.

The onset of puberty can be a particularly distressing time for a child who is transgender as their body is developing more characteristics that do not match their gender identity. Menstruation, developing breasts, growing facial hair and a deepening voice can cause significant distress and they will require support from families, peers and school environments. Some young people will seek puberty blockers during this time which block the hormones that lead to puberty-related changes in the body (and students may or may not choose to share this information with school staff and peers). Teachers need to be particularly cognisant of how lessons on puberty and related topics might affect young people going through these potential challenges. As with all sensitive topics, it is best that teachers do not make presumptions about their students' life experiences - private personal information is not always shared and the challenges someone is going through are not always visible. See Teaching tips below for ways to deliver inclusive lessons and be a supportive school.

It has been estimated that between 1.2% and 4% of Australian young people are gender diverse or transgender.1 2 This means that, in a school of 1000 students, between 12 and 40 students may identify as transgender. Young people that identify as transgender can have huge difficulties at school – Do they feel safe to share their true gender identity with peers, other students, teachers? Will they be bullied or discriminated for sharing their true gender identity? Which toilets and change rooms should they use? What uniform should they wear? What if they go to an all-girls or all-boys school? Schools need to be conscious that there may be students in their school who may identify as transgender or be questioning their gender identity. These students may not feel safe expressing this at school (or home or both).

Non-binary is the term that includes people who don’t identify as male or female. They may identify as neither male nor female, both, or another.

Pronouns are words that take the place of nouns, we use personal pronouns in the place of someone's name. People who are cisgender aren't likely to have given their personal pronouns much thought, but for someone who is transgender or gender diverse it can be a very important part of affirming their gender identity. Everyone has the right to decide how they are referred to by others. Just as people choose to be called by their full name (e.g. Elizabeth instead of Liz), by a nickname (e.g. Bill instead of William), or as Miss/Ms/Mr/Dr, people also use the pronouns that affirms their gender identity. Some common pronouns include: she/her/her (typically feminine) and he/him/hers (typically masculine). Some people prefer gender neutral pronouns such as they/them/theirs or ze/zir. Using the correct pronouns (and names) shows that you respect that person and their identity. 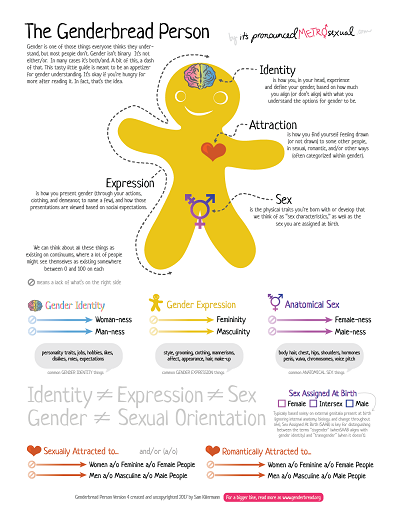 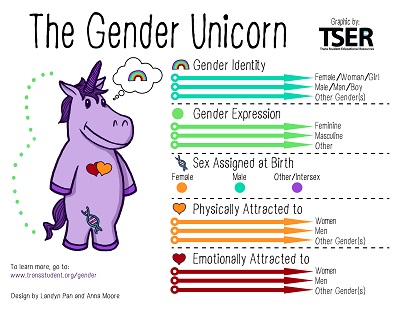 Although some people may use the following terms to describe their own gender, most of the terms are considered outdated, inaccurate and/or offensive:

Pre-operative (pre-op) and post-operative (post-op) - terms to describe if a transgender person has had gender affirming surgeries or not. Many transgender people do not want or do not have access to surgeries and focusing on whether someone has had surgery or not is invasive and a violation of privacy.

Transsexual - an older term that some people find offensive.

Tranny - while some transgender people refer to their gender by this term, most find it highly offensive.

Transgender and gender non-conforming people may experience harassment or discrimination from people who are scared or uncomfortable with such identities. This is referred to as transphobia. It is the fear, hatred, disbelief, disrespect, exclusion or mistrust of people who are, or who are thought to be, transgender or gender diverse.

School can be a nurturing place, and there are lots of stories of young people being supported and celebrated in their identity but schools can also be a place where young people experience bullying, exclusion and abuse. 75% of gender questioning young people experience abuse or discrimination and 80% of the abuse happens at school.4 The types of harassment and discrimination experienced at school include: discriminatory language; social exclusion; deliberate use of the wrong pronouns; humiliation; rumours; online bullying; written abuse; graffiti; verbal abuse; and physical abuse.5 The impact of this discrimination at school can lead to: inability to focus in class; truancy; poor academic performance; self-isolation during break times for personal protection; missing days at school; and complete disengagement with the school system.5 Discrimination related to gender identity can have a significant impact on mental wellbeing. The statistics are alarming, with 48% of transgender people having attempted suicide and 80% having self-harmed in their lifetime.6 All school staff need to ensure that they are providing a safe environment for all of their students. There are many helpful services and resources that help support students, schools and families listed in the resource section below. Inclusive Education WA  (external site) work specifically in this area of support.

Disclaimer: Educators are required to preview all texts, videos and songs prior to use in class to determine the suitability for their students and school. see Department of Education Policy: Use of texts in education settings (external site)